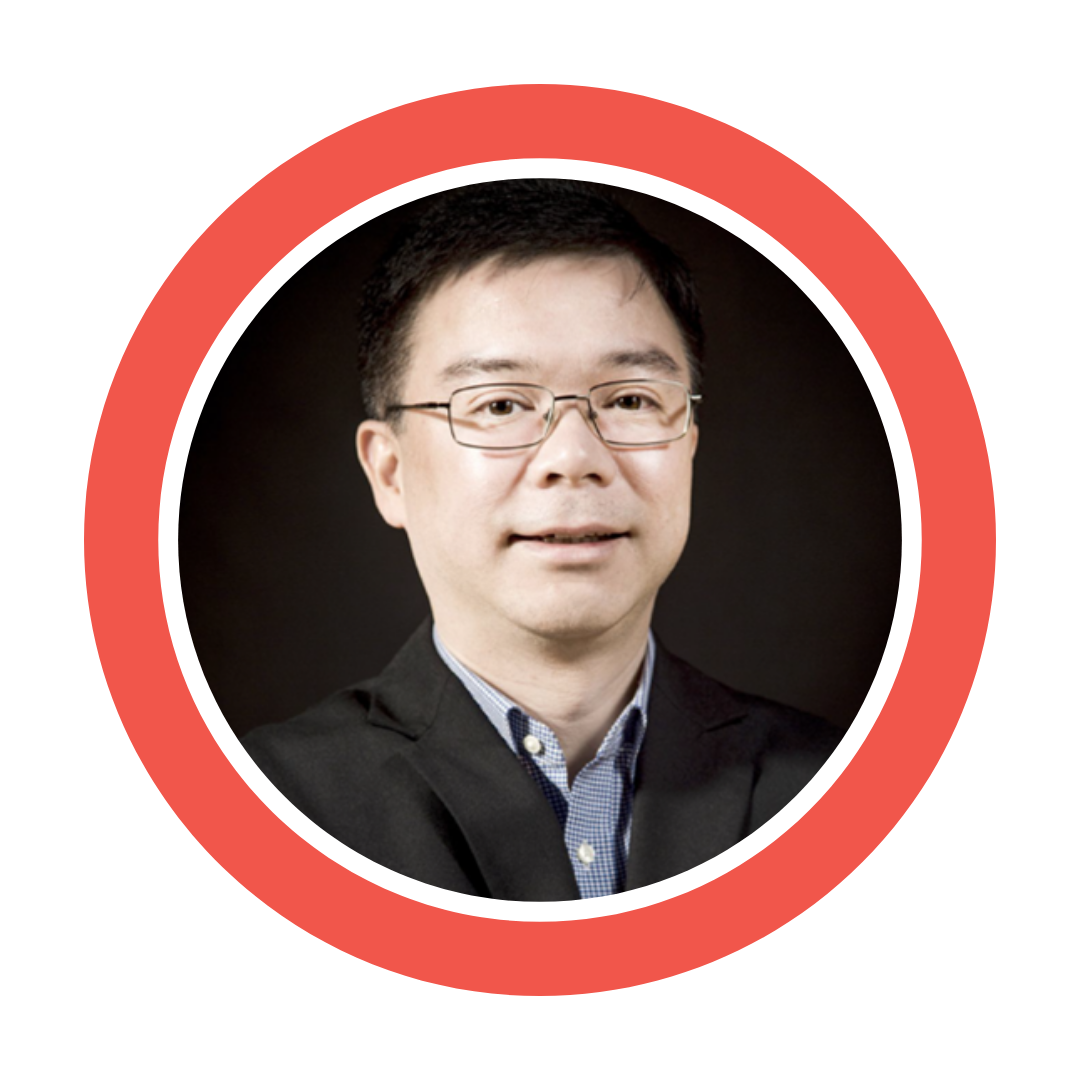 Dr. Dy-Liacco holds a Ph.D. in Pastoral Counseling from Loyola University Maryland,USA. He has also taught in the Department of Pastoral Counseling also in the same school. Pastoral counseling is a unique discipline that blends professional counseling and psychotherapy with a carefully integrated spiritual dimension.His clinical work is in the treatment of individuals, couples, families and groups for a wide range of issues. These include adult and childhood abuse and trauma, psychiatric diagnoses, personality disorders, addiction, and non-psychiatric problems in living.He is a licensed professional counselor and has practiced psychotherapy and counseling in various mental health settings since 1997.Dr. Dy-Liacco is an Associate Professor in the School of Counseling of Divine Mercy University (Virginia, USA).

His own research focuses on the relationships among faith, spiritual experience, spiritual struggles, and psychological flourishing.

In 2018, Pope Francis appointed Dr. Dy-Liacco for a second term to the Pontifcal Commission for the Protection of Minors. 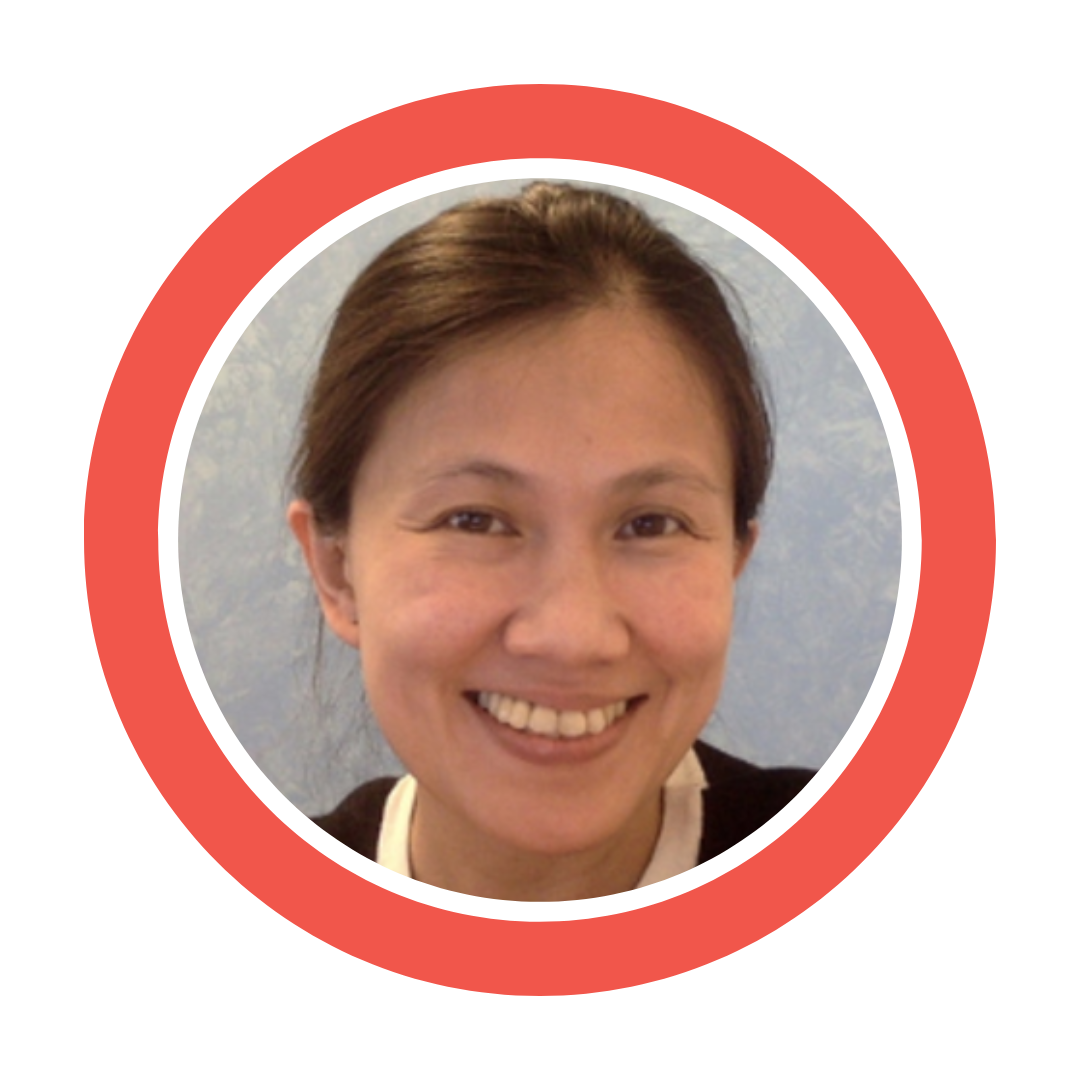 Rojean Caharian Macalalad dedicated the first part of her work history with Cartwheel Foundation, Inc. She began by facilitating ways for the indigenous peoples of Mindanao, Philippines to gain access to quality education, eventuallycoming to lead the NGO as its Executive Director.

Later, she would gain international experience managing the Executive Secretariat of the World Christian Life Community (CLC) in its main headquarters in Rome, Italy. The CLC is an apostolic worldwide community of lay Ignatian, of around 23,000 members. This has also led to her experience liaising with the Vatican, and various levels of governance and networks of the Society of Jesus. Before being assigned to Rome, Rojean finished her Master in Development Management (MDM) in the Asian Institute of Management.

Helping shape more humane and just societies has always been Rojean's passion. She brings with her a development management mindset and toolkit, grounded by local experience, deepened by a global perspective, and enriched by her lay Ignatian vocation. Her mission now is to bring this in the service of the Church in the world during this kairos moment.

Father James Wenceslao U. Gascon, S.J. earned his Bachelor of Science in Fisheries from the University of the Philippines in 1984. From a fisherman to “fisher of men and women,” he entered the Jesuits in 1991 after working as a Fishery Biologist and an Entrepreneur for a number of years. He was ordained priest on April 7, 2001. Immediately after ordination, he was missioned to the National Bilibid Prison (NBP) Muntinlupa, as a Volunteer Chaplain and eventually the Executive Director of the Philippine Jesuit Prison Service (PJPS) for two years. In 2003, after completing his MA in Theology from the Ateneo de Manila University, he went to Fordham University in New York, NY, where he earned his MA in Pastoral Counseling and Spiritual Care (2005). From Fordham, he underwent an Internship program for three years at the Blanton-Peale Graduate Institute, New York City, where he got his Certificate in Marriage and Family Therapy (Cert-MFT). Returning from studies, he worked as a Senior Pastoral Psychotherapist of the Ruben M. Tanseco Center for Family Ministries (RMT-CEFAM), where he was also President for 11 years and Chairman of the Board of Trustees (two terms). He also served as one of the formators at the San Jose Seminary for 12 years, in-charge of Psycho-Human formation. Currently, he is Asst. Professor of Pastoral Counseling and Family Ministry at the Loyola School of Theology (LST) where he earned his Licentiate in Sacred Theology (STL- May, 2020). He also holds a Doctor of Ministry (DMin) in Pastoral Counseling and Spiritual Care from the Theology and Ministry Program, School of Humanities, Ateneo de Manila University, graduating on October 11, 2020.

Presently, he resides at the Jesuit Residence of the Ateneo de Manila where is the House Minister. He is the Diploma Course Director and Chaplain of the Catholic Safeguarding Institute. 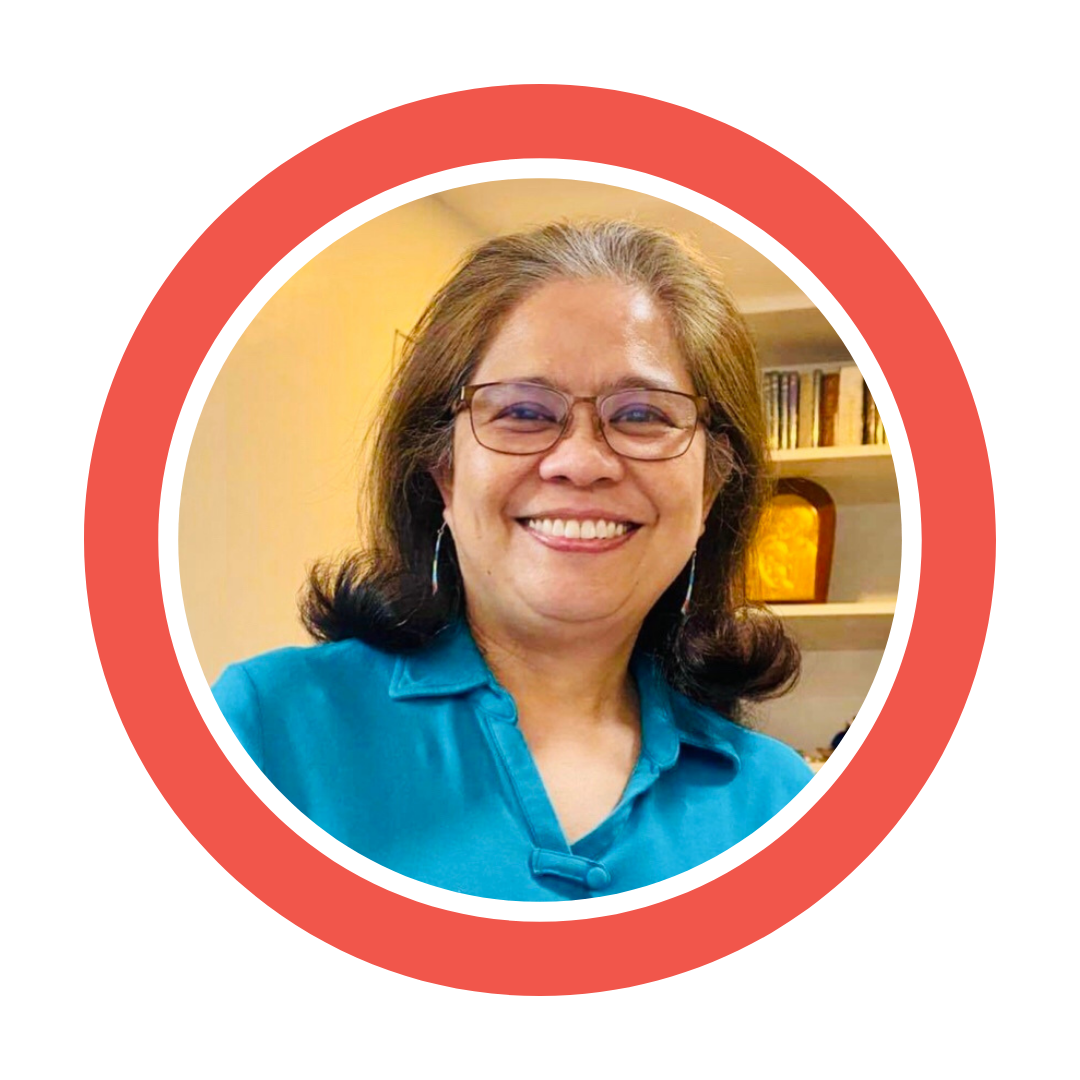 Dr. La Viña went to the Gregorian University and attended the Diploma in Safeguarding of Minors in 2017. Since then her engagement with safeguarding has included being a consultant to the Philippine Jesuit Provincial on Professional Standards, 2016 – 2020; and an Associate member of the Catholic Bishops Conference of the Philippines (CBCP) – Episcopal Commission on Clergy (ECCler), 2017 - 2019.

Prior to joining the Catholic Safeguarding Institute, she was a pastoral psychotherapist at Emmaus Center for Psycho-Spiritual Formation from 2007 to 2019. Her first career in social development from 1980 to 1994 involved student organizing, women’s issues, and rural development. She belonged to the pioneering batches of the Jesuit Volunteer Philippines (JVP; Batches 1 & 2) from 1980 to 1982. 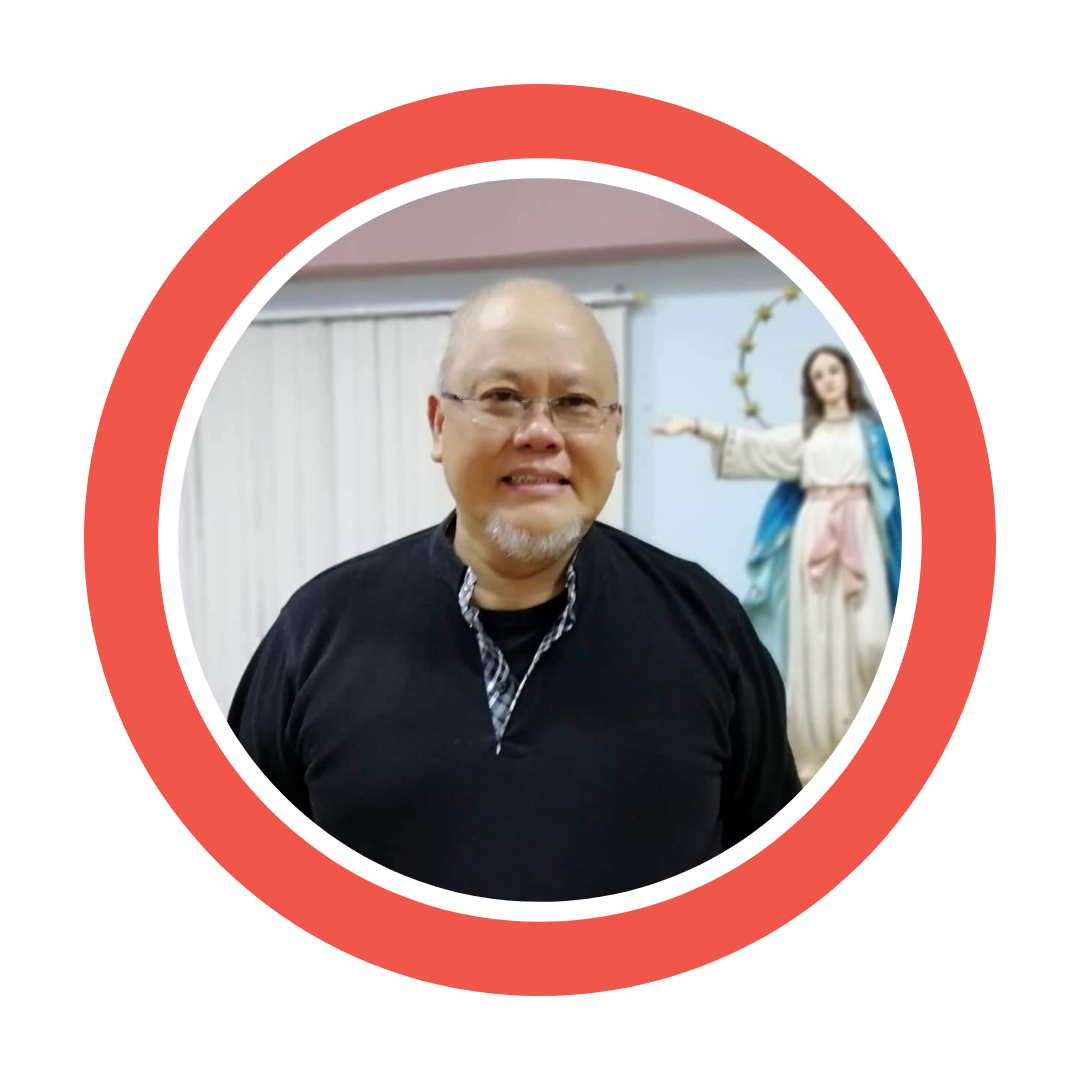 Msgr. Masculino holds a Master of Science (MS) in Pastoral Counseling from Loyola University in Maryland. He also holds a Master of Arts (MA) in Religion and Religious Education with concentration in Spirituality and Spiritual Direction from Fordham University in New York. He has been a Pastoral Counselor and Spiritual Director for lay, seminarians, religious and priests since 2003. He is a diocesan clergy of the Archdiocese of Jaro.  He is also a founding member of Growth Alternative for Managing Organisational Transformation (G.A.M.O.T.) Resources, Inc. and has been an affiliate member of Spiritual Directors' International since 2005.

He holds an Advanced Professional Diploma (APD) in Pastoral Care and Counseling from Fordham University in New York, USA (1999-2000) and a Diploma in Safeguarding of Minors from the Pontifical Gregorian University in Rome (2017). He was a resident and administrative staff of John Mary Vianney-Galilee Development and Retreat Centre for Priests in Tagaytay City, Philippines from 2013-2016. He recently finished his three-year term as the Executive Secretary of the Catholic Bishops' Conference of the Philippines - Episcopal Commission on Clergy.  His assignment at the Catholic Safeguarding Institute is currently his primary ministry. 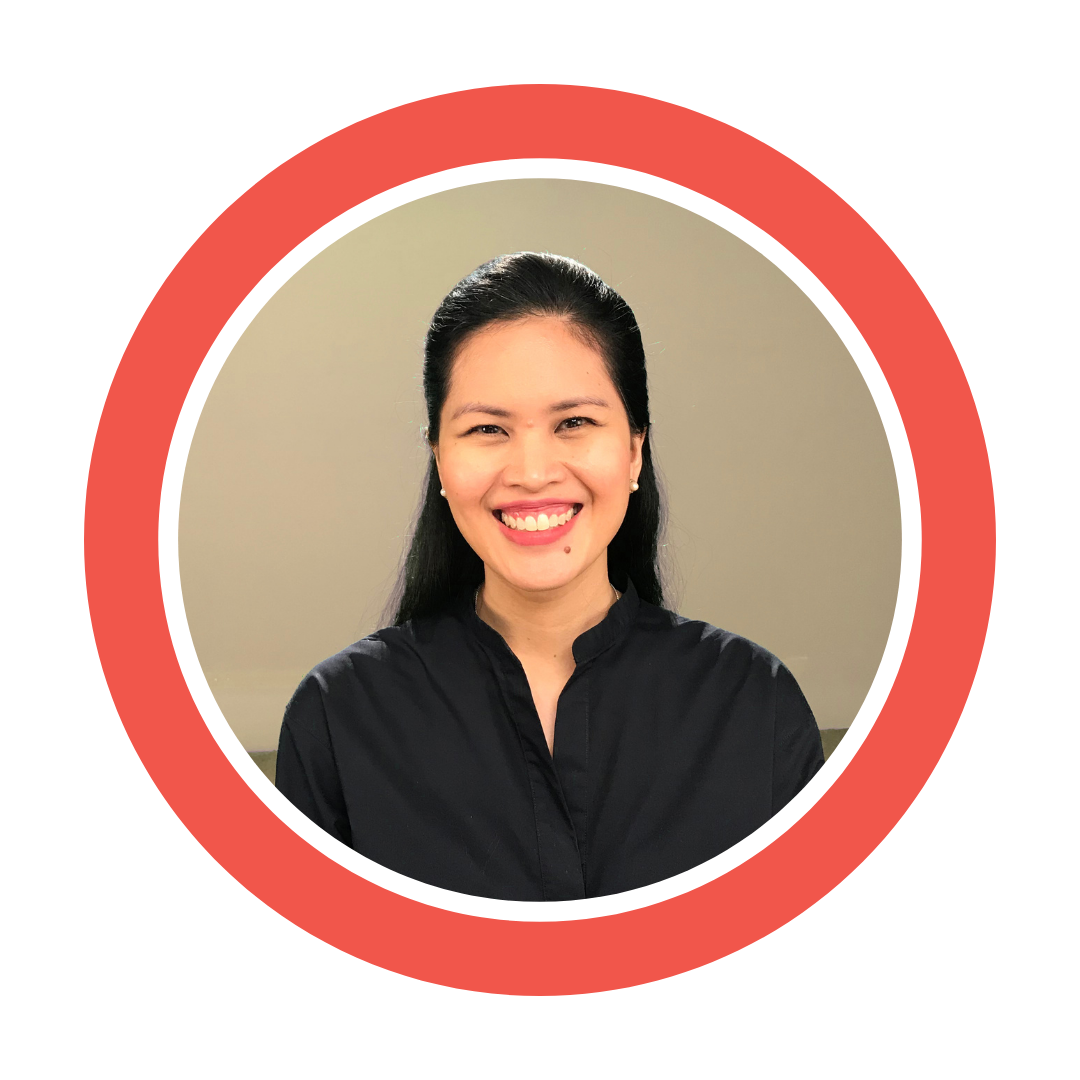 Coleen is a development professional with over 14 years of experience in program and organization management, training, research, advocacy, and communications.  Prior to joining the Catholic Safeguarding Institute, she held Director positions at Cartwheel Foundation, Inc. and Cartwheel Foundation International.  Her extensive work with marginalized groups, particularly the indigenous peoples, specialized in education and health.  She continues her service-driven path in the area of safeguarding of children and vulnerable adults.  She also seeks to help persons build mind and body balance and strength as a barre3© fitness instructor.

Coleen holds a Master of Arts degree in Media and International Development from the University of East Anglia in the United Kingdom.  She earned her Bachelor of Science degree in Management in Communications Technology at the Ateneo de Manila University in the Philippines.

Maria Liza Jorda is a City Prosecutor for the Department of Justice based in Tacloban City, Leyte, Philippines. Since 2005, Fiscal Jorda has focused on cases involving violations of the Anti-Violence against Women Act, Child Abuse Law, and the Anti-Trafficking in Persons Act.  She is active on the Justice Department’s Task Force against Trafficking in Region 8, an area of the Philippines that is both a source and transit point for human trafficking.  Her tenacity in pursuing human trafficking cases has brought her numerous death threats.  In addition to her prosecutorial work, Fiscal Jorda speaks regularly to law enforcement and social welfare officers about these three major laws affecting women and children in the Philippines to encourage better implementation.

Fiscal Jorda was selected to receive the Aquino Fellowship because of her fearless and selfless work for women and children who have become victims of abuse and exploitation.

Gina is an educator and mental health clinician with a combined experience of 30 years in educational and clinical settings. As an educator she is focused on bridging the divide between learning and mental health in classrooms. She was the former lead global trainer for the Healing and Education through the Arts Program at Save the Children USA, where she trained teachers in Asia, Africa, Latin America, Eastern Europe, and the Caribbean.

As a clinician in private practice, she is a certified trauma specialist and board certified art therapist focused on working with individuals, couples, and families dealing with a range of issues: stress, depression, suicidality, and other personality, mood, behavioral and developmental concerns. She received her Masters  in Education from Fordham University, her Masters in Clinical Mental Health Counseling with a focus on Art Therapy from Lesley University, and finished her doctorate in Expressive Arts: Therapy, Coaching, Consulting & Education, Conflict Transformation & Peacebuilding from the European Graduate School. Gina is also the lead Convenor of Expressive Arts Philippines Network, Founder of Cartwheel Foundation, and lead author of the AHA Book Series.

Mary Rhauline Lambino-Torres (Rory) is a lawyer with eight years of cumulative practice in corporate and commercial law, and litigation and arbitration. Rory is also a children's rights and body safety advocate for children. Her interest in the field originates from her work at the Manila Field Office of International Justice Mission, a Washington DC-based NGO that fights against online sexual exploitation of children. She was also an instructor of Children’s Rights, as well as Constitutional Law, at the De La Salle University College of Law.She is currently taking her Master of Laws at Harvard Law School focusing her studies on technology law, and is writing her research on data governance of personalized learning platforms for children. She studied at the University of the Philippines where she obtained her Juris Doctor and BS Economics degrees, graduating both with cum laude honors.She and her husband are currently trying to learn Spanish and they are proud parents to their four-year old daughter.

Monsignor Brendan Daly is a priest of the Diocese of Christchurch who was ordained in 1977. He completed his JCD at Saint Paul University, Ottawa, in 1986 with a thesis concerning infant baptism. He has taught at Holy Cross College from 1987 and was rector of Holy Cross Seminary from 1995-2000. He was a lecturer in canon law at Good Shepherd College – Te Hepara Pai  in 2001 where he became principal in 2002. He is lecturer in canon law at the Catholic Theological College, Auckland.  He is the Judicial Vicar and a judge on the Tribunal of the Catholic Church for New Zealand. 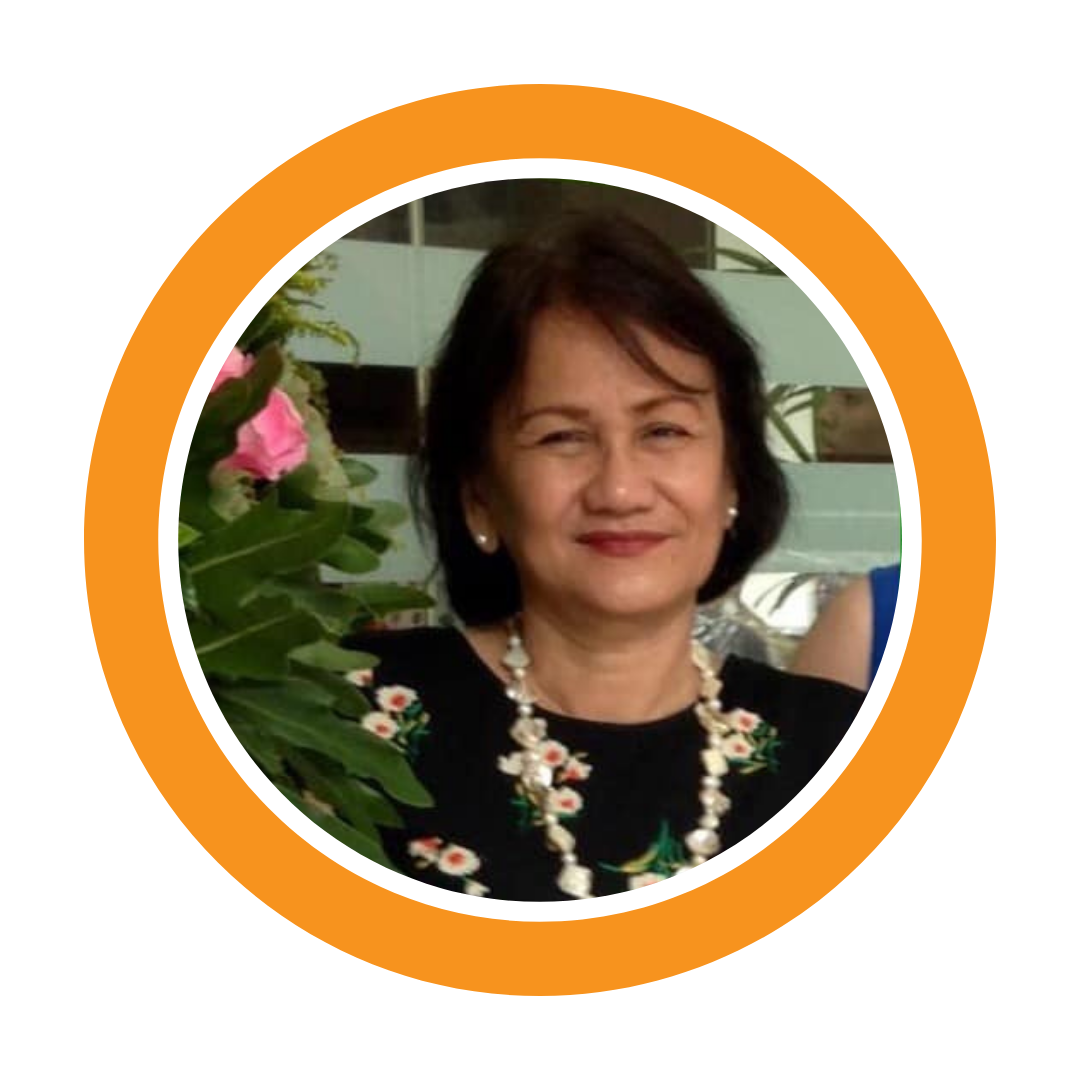 Mary joined the Catholic Safeguarding Institute in 2019.  Prior to this, she worked at the Emmaus Center for Psycho-Spiritual Formation as Programs/Admin from 1996 until retirement in 2019.

She is a mother to a daughter and a son, and a grandmother to a 5-year- old. 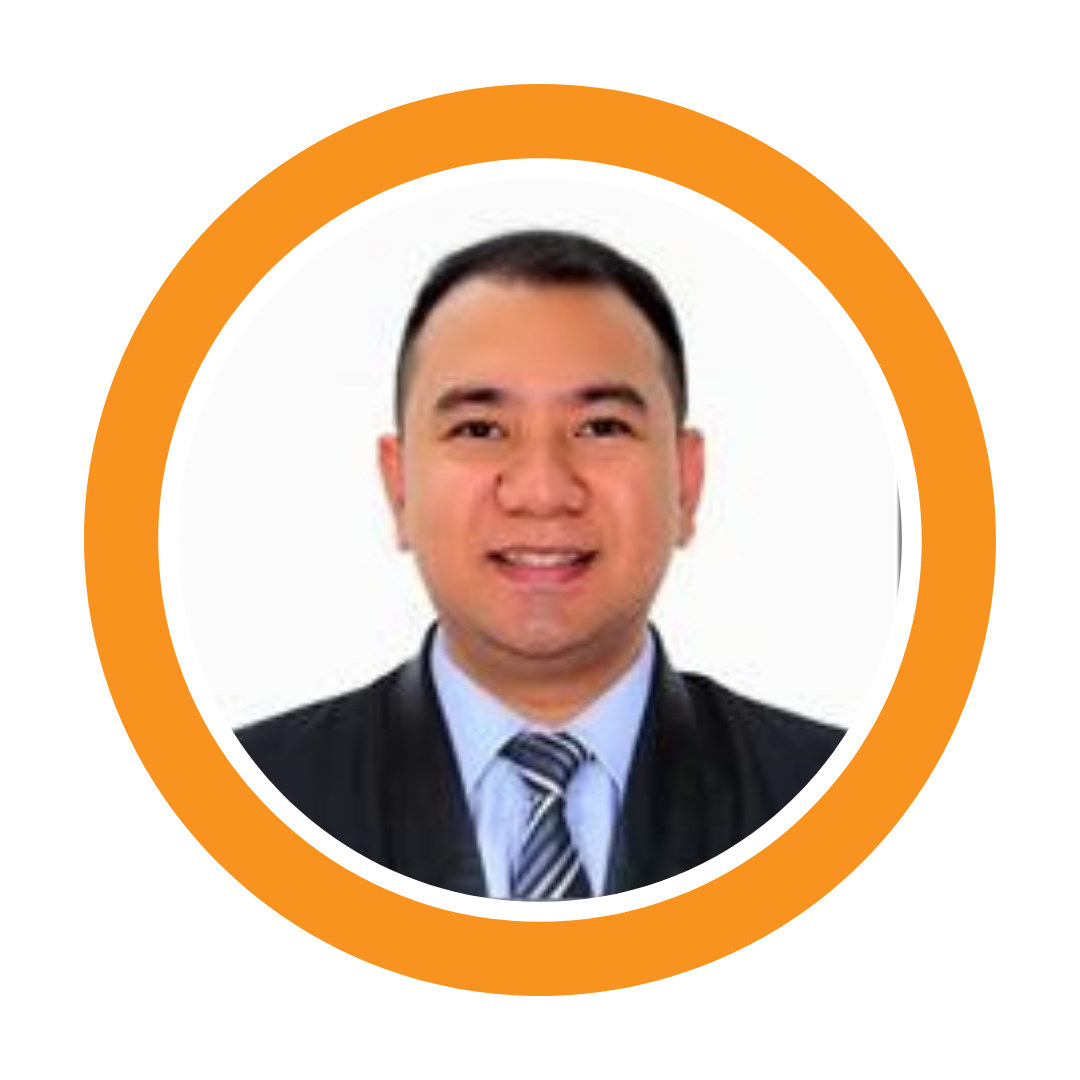 Jayson A. Estacion was a former seminarian and a missionary. He was assigned in Cebu, Bulacan, Marikina, Makati and Dagupan. He facilitated community building, Basic Ecclesial Community, leadership training, recollection, retreat, and catechesis.

Jayson holds a Master of Arts in Theology Major in Pastoral Ministry from Maryhill School of Theology. He earned his Bachelor of Arts in Philosophy in Divine Word Mission Seminary. 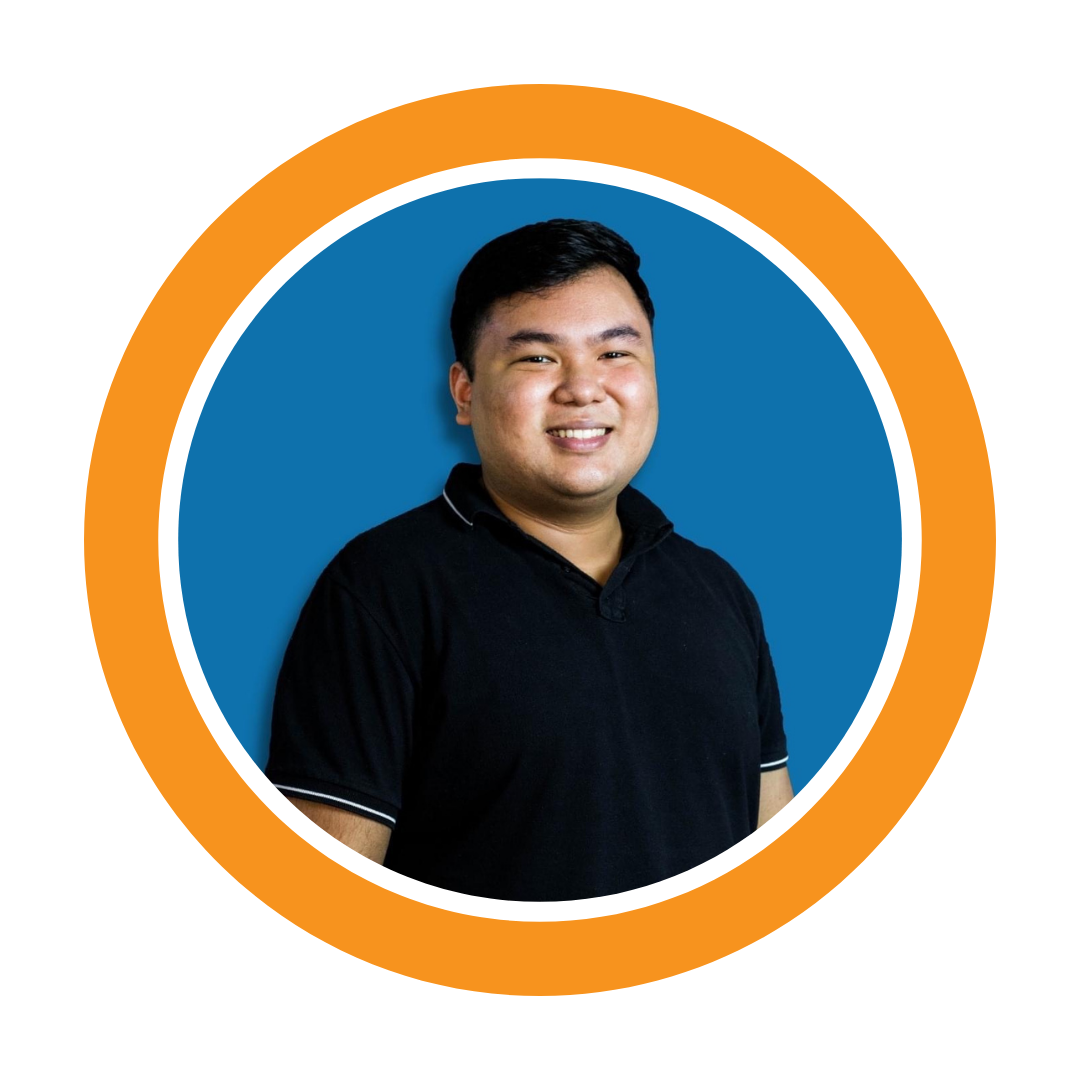 Neil is social media expert with an extensive experience in his local Church. He is volunteer social media manager in AlmuSalita by Fr. Luciano Felloni - a religious organization for 7 years. Prior to joining the Institute, he was the Digital Marketing and Project Officer at Kristong Hari Parish, Shrine of the Youth. He was the prior coordinator of the Our Lady of Lourdes Parish’s (Diocese of Novaliches) Social Communications and Media Ministry.

Neil earned his Bachelor in Elementary Education Major in Preschool Education at the University of Santo Tomas.